Yesterday evening i got out of the meditower and was invited to join an exploration group to Treangi. My desire to see something new was greater than my fear for the ocean and so i went to partybeach and tried to reach the others as fast as possible to reduce risk for myself in that little boat.

The most risky part was to get to Treangi, because we had to cross Aroona for it, which is inhabited by giant cats with sharp claws. The way there proved rather easy, as we had several fighters skilled 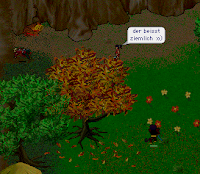 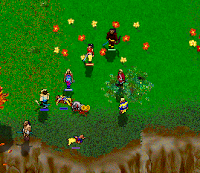 the wounds we took. At least i could prove my skill in recovering the furs of beasts and was able to take the lead in two categories: Aroona Tigris and Aroona Wildschwein.

When we arrived in Treangi, we encountered mainly Yukus, which look like a walking mixture of gherkin and cactus. They were throwing pieces of wood on us and were quick in evading our blows, but when they were trapped it didn´t take long until they were overwhelmed. For some of them we even got nice bountys. All in all we managed to finish the exploration rather quickly, as the other monsters there proved no threat for our group. Treangi seems to stretch for about 2 snells north and the length of Aroona. At the eastern entrance we discovered a blocked cave, which might be worth checking after one of the bigger storms. 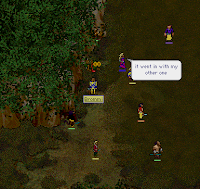 Our way back was a little more dangerous. We lost all our healers at the entrance, but some fighters survived. Despite some Tae-Su trying to prevent it, a rescue soon arrived and the group could be revived. And then came what had to come: we became too sure of ourselves and wanted to hunt some more cats. Crash lured some of them but somehow the border never closed and so we were overwhelmed once again, as the Giant Tigris proved to hit very accurate. So the exploration ended in a painful death, but all in all it was a funny day.

Thanks again to Frenzymac who accompanied me to Insulea earlier and helped me get some Orgaslime, which i brought to Donoma to buy a Buckler soon after. Although it´s smaller than my old shield, i think with some training i can evade more hits with it because it´s easier to move it around to avoid the next blow.
Eingestellt von Glamdring um 15:12